As It Occurs To Me (or AIOTM as all the cool kids call it) is a groundbreaking, award winning stand-up and sketch show with Richard Herring, Emma Kennedy, Dan Tetsell and Christian on the singing and the geetar. The last season (2017) even made it onto TV, if by TV you mean YouTube (and I do). Four series, plus bonus episodes. All free, all right here. You’re welcome!

In 2018, Christian started a podcast about economics with Patricia Pino, called The MMT Podcast. It’s not a comedy podcast, but designed to help people understand economics in an engaging, down-to-earth way. Read more about it here. 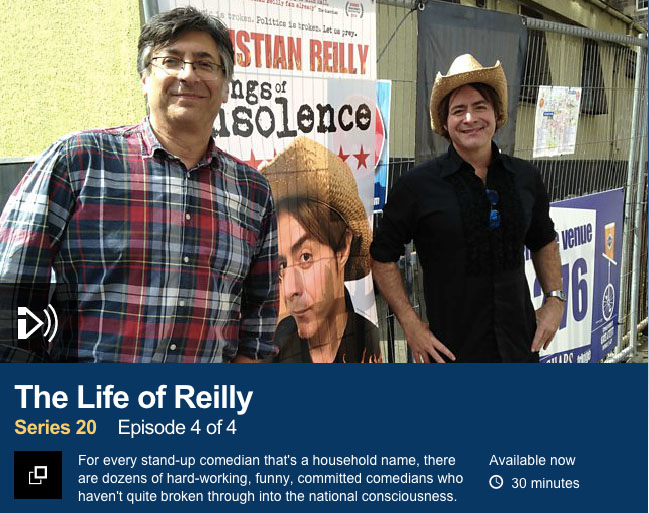 On 7th September 2015, BBC Radio 4 aired a documentary about my journey to the Edinburgh Festival called “The Life of Reilly”. You can listen to it on the BBC iPlayer here, download the podcast here, or search “The Life of Reilly Lives in a Landscape” on your iPhone’s podcast app.

In April 2015, Christian performed a song about elections (called “Choices”) on the topical podcast No Pressure To Be Funny. Other guests included Jo Brand, Andy Zaltzman, Nick Revell, Joe Wells and Angela Barnes and it was hosted by Alistair Barrie. You can download it here.

Between 2004 and 2008, Christian wrote and performed (along with my band) songs for That Was Then, This Is Now, a history-based sketch show on BBC Radio 2. It starred and was co-written by Richard Herring, Emma Kennedy, Dan Tetsell and Danny Robins. You can get all the episodes here.